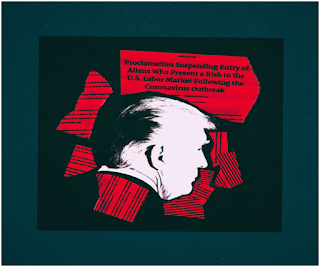 On June 22nd, 2020, the Trump Government passed a proclamation that suspends and limits the entry of H-1B, H-2B, L visas and, their dependents into the US till the 31st of December, 2020 except for medical workers and scientists involved in the coronavirus research.

According to the US government, the banning was necessary seeing the spike in the unemployment rate in the country with more and more citizens finding it difficult to keep a stable job amidst the current pandemic.

The unusual enforcement and the impact of the proclamation directly affect the economy and a significant amount of foreign-born workers and their employees as they adjust to their new status quo. A lot of people find themselves amid chaos and distress as they now have to figure everything out whether it be the people already stuck in a foreign land with no definite means of livelihood or the ones who had a lot of plans for the future.

But does the situation contain any positive aspects?

It’s very difficult to view a circumstance like this to present any positive opportunity especially in a country like India where being employed in a foreign country, especially a first world nation like the States is assumed to be the sign of a successful career. A significant percentage of our country’s very talented youth are recruited by various foreign companies which the students themselves prefer more than their nation’s companies.

With the employment opportunities in the States being lowered, a lot of eligible graduates will have to turn to the job opportunities presented in their own country, which can be very beneficial to the economy of this country seeing as we’ve lost a number of eligible workers to the US over the past few decades.

The reason why a lot of US companies prefer foreign workers was because they can get away with paying the employee a lower wage as compared to one they would have paid to a US citizen because it’s always easy to exploit a desperate person. Usually, the workers who turn to the US for job opportunities are one of the best in their fields in their own countries who deserve a lot more than they actually procure in the US.

Now that the situation is completely different from the visa ban, a lot of the tech firms will have to resort to investing in India itself which in turn will not only help with the economy but also present a lot of job opportunities to the youth here thus helping the with employment rates.

Not only the IT sector but the medical and research field of the nation will also benefit and advance along with the business sector.

Seeing the current state of unemployment, with a lot of people losing their means of livelihood because of the COVID pandemic and the job sector narrowing down, the H1-B ban could be a boon in disguise. With a lot of Indian companies being forced to shift back to India, a lot of job opportunities will be created for the local youth and workers. Especially the Indian IT sector will flourish as people can work from home and earn money.

This will also be beneficial in improving the perception of people of the country that your success in a particular field can be directly proportional to one being employed in a foreign country. Instead of criticizing the shortcomings of their own country, skilled people can actually work on it and help the nation develop as a whole.

The problems that come with the ban cannot be ignored, a lot of people will lose their jobs and opportunities. Completely uprooting your entire life and lifestyle is never an easy task and the uncertainty of when things will go back to normal is not a minute problem to get over. But humans have always been capable of adapting to the changes and making the very most of each moment.

In conclusion, the H1-B visa ban isn’t going to be a light issue to deal with but maybe there are not all going to be negative outcomes. With so many highly skilled technology entrepreneurs and skilled workers involved in the local economies, the country in itself will undoubtedly perform well in every aspect and will become more of a stronger force to be reckoned with throughout the world.