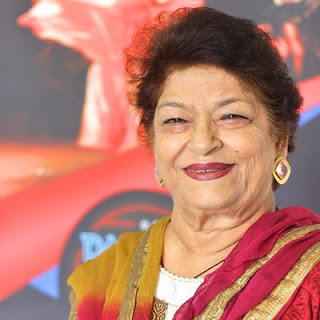 The Legendary Saroj Khan was born with the name Nirmala Kishanchand Sadhu Singh Nagpalon 22 November 1948 in Bombay(present-day Maharashtra).Her parents had migrated to India after partition took place in 1947. She was one of the most well known and leading dance choreographers of India in the Hindi Film Industry.

Ø  ”Nach Baliye”(2005) on Star One and
Ø  ‘Ustaadon ka Ustaad’ on Sony Entertainment Television.
She has also appeared as a judge alongside others in shows like
Ø  “Jhalak Dikhla Jaa”(2009,3rdSeason)
Ø  “Boogie Woogie”(2008)

She even hosted her own dance show –“Nachle Ve” with Saroj Khan(2008) on NDTV imagine. She has also appeared as a judge in a dance competition in the show-Taarak Mehta Ka Ooltah Chashma. In 2014, she worked alongside Madhuri Dixit in the Movie-Gulaab Gang.

A documentary was also released by  Nidhi Tuli on her story in the year 2012, produced by PSBT and Films Division of India.
Not only as a choreographer, she has worked as a writer too for movies like–
Ø  Khiladi
Ø  Veeru Dada
Ø  Hum Hain Bemisaal
Ø  Chhote Sarkar
Ø  Dil Tera Diwana
Ø  Hote Hote Pyar Ho Gaya
Ø  Benaam
Ø  Khanjar
Ø  Nazar Ke Samne
Ø  Daava
Ø  Judge Mujrim
Ø  Bhai Bhai

FILMFARE AWARDS
She won in the category of “Best Choreography” consistently from 1989 to 1991. She was the firstone to get this award through the song “Ek Do Teen” in Tezaab and held the record of winning the “Best Choreographer” Award for the maximum times, which is 8.The Movies through which she won this award are-Guru, Devdas, Hum Dil De Chuke Sanam, Khalnayak, Beta, Sailab, Chaalbaaz, Tezaab.

She won the American Choreography Awardfor achievement in the film-Lagaan: Once Upon A Time In India.

She won the Nandi Award  for her choreography in the movie-Choolani Vundi(1998).

At the age of 71, she died on 3rdJuly 2020 due to cardiac arrest. She was admitted to the Guru Nanak Hospital at Bandra, Mumbai on June 17,2020 due to breathing difficulties and was in the ICU.

The journey of Saroj Khan is inspiring for every individual who aspires to be a choreographer. Her work is legendary and she will always remain in our hearts. Especially, the ’90s have been golden years and her choreography to the songs is still danced on. The gesture of her giving a one rupee coin as shagun to a performer under her care will be missed. May her soul rest in peace.